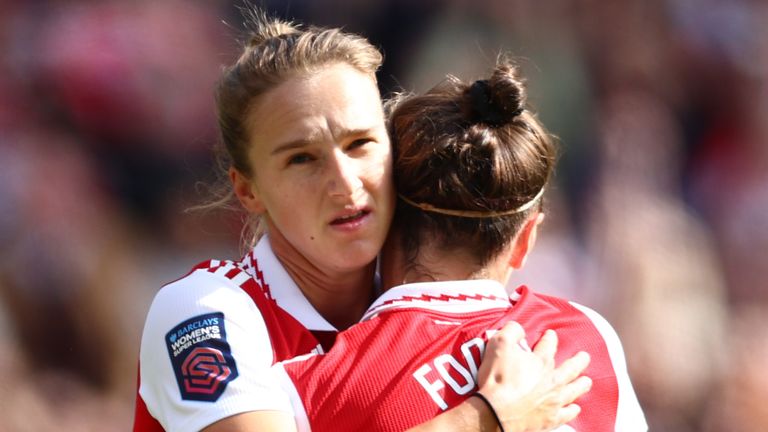 Vivianne Miedema’s double helped Arsenal to a superb 4-0 win against Tottenham in a North London derby that smashed the WSL attendance record.

47,367 fans packed into the Emirates to watch the Gunners sweep aside their local rivals, smashing the previous record of 38,262 when Arsenal and Spurs played at the Tottenham Hotspur Stadium in November 2019.

Arsenal made sure their supporters went away happy as well as Beth Mead fired the hosts ahead inside five minutes. Her initial shot was blocked, but she instantly received it back before curling a sublime effort past Becky Spencer. It was Mead’s third goal in the opening two games of the WSL as she continues her fine form from Euro 2022.

The Gunners had chances either side of Mead’s fifth-minute strike too. The winger also had a chance well blocked after a superb squared pass from Lia Walti and, after the Gunners had taken the lead, Kate McCabe fired just over the crossbar.

Arsenal captain Kim Little had some areas of the record-breaking crowd celebrating an Arsenal second on the half-hour. However, her fierce strike on the angle only found the side of the net as the Gunners continued to press.

The hosts finally added their second shortly before the break. It was a catastrophic error from Spurs as Eveliina Summanen failed to control a pass from Spencer, allowing Miedema (44) through to slot home her first of the game.

Both of Arsenal’s goals came from corners in the second half as Tottenham continued to struggle defensively. Inside 10 minutes, Mead swung in a wonderful ball, with Rafaelle Souza (54) rising above two defenders to power her header home.

Miedema was on target again as Arsenal stunned Spurs with a short corner. Steph Catley sent in the ball, with the forward beating Spencer in the air to nod home. Leah Williamson could have added a late fifth, but her looping header landed on top of the net.

The Gunners were in control throughout, with Tottenham not having any chances of note. Most of the efforts went well wide of Manuela Zinsberger’s goal, with the Arsenal goalkeeper joining the 47,367 fans inside the ground as a spectator for much of the match.

Arsenal have now won their last 10 WSL matches, scoring 95 goals and conceding just twice. The clean sheet was their eighth in a row – another WSL record.

Arsenal go to Amsterdam on Wednesday to face Ajax in the second leg of their Women’s Champions League qualifier. The tie is finely poised at 2-2 following the first leg at Meadow Park, with the winner reaching the group stage.

An international break then follows with the WSL returning on the weekend of October 15-16.

What else is happening in the WSL this weekend?

There are five more WSL fixtures taking place on Sunday, including two live on Sky Sports: