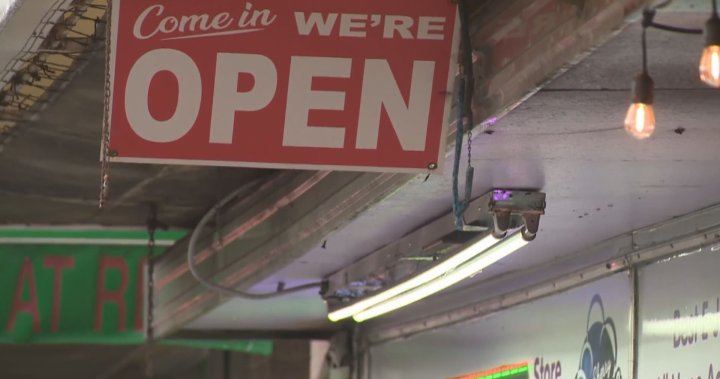 With less than a month until Christmas and BC Buy Local Week now underway, the Mount Pleasant BIA is urging Vancouverites to support local merchants this holiday season, as the Broadway subway line faces a new construction delay.

“To tack on another six months after that is going to impact them greatly.”


In a Nov. 24 progress bulletin, B.C.’s transportation ministry said because tunnel boring was affected by a five-week concrete strike in June, the completion of the $2.8 billion project has been delayed until early 2026.

“It was a little bit of a kick in the gut,” Portside Interiors owner Gene Guindon said.

Guindon knew he was brave when he opened his furniture and design store in 2021 in the space vacated by Hill’s Native Art Gallery at 120 East Broadway, which is now  at the centre of the construction zone.

Portside’s front door is steps from a massive hole as crews continue to work on the new underground Mount Pleasant Station at the southwest corner of Broadway and Main Street.

“Parking and access has been our number one difficulty,” Guindon explained.

With street parking on the Broadway corridor stripped 24/7, the Mount Pleasant BIA has helped Guindon secure back-of-store parking for his customers, and also set up a parking rebate program supported by participating businesses.

As retailers continue to recover from the pandemic and restrictions lift, the Canadian Federation of Independent Business said small businesses are also facing increased costs and labour shortages.

“These are really dangerous times for small firms and the holiday shopping season is absolutely critical,” CFIB president and CEO Dan Kelly said.

Many retailers, Kelly said, report 40 per cent of annual sales happen in the six weeks before Christmas.

If consumers dedicate even a small chunk of their holiday shopping to small businesses in their neighbourhoods instead of buying everything online from big giants, Kelly said it makes a huge difference.


“If we had some more support from government I think that could ease a lot of the pain,” Guindon told Global News.

Guindon and the Mount Pleasant BIA believe there should be some form of compensation for the impact of a five-year mega project.

“It’s extending past the original ETA. I feel like they’ve got to strongly change how they’re approaching this for the businesses,” Guindon said.

“Some of the businesses won’t make it.”

As a new business, Guindon said Portside Interiors will ride out the construction storm and looks forward to the project wrapping so they can be “part of the glory of a new SkyTrain.”

Denial of responsibility! Todays Chronic is an automatic aggregator of the all world’s media. In each content, the hyperlink to the primary source is specified. All trademarks belong to their rightful owners, all materials to their authors. If you are the owner of the content and do not want us to publish your materials, please contact us by email – todayschronic.com. The content will be deleted within 24 hours.
BC Buy Local WeekBroadwayBroadway BusinessesBroadway corridorBroadway SubwayBroadway Subway Delaybroadway subway delayedBuy Local
0
Share

Indian docu-drama Against the Tide bags award at Sundance…