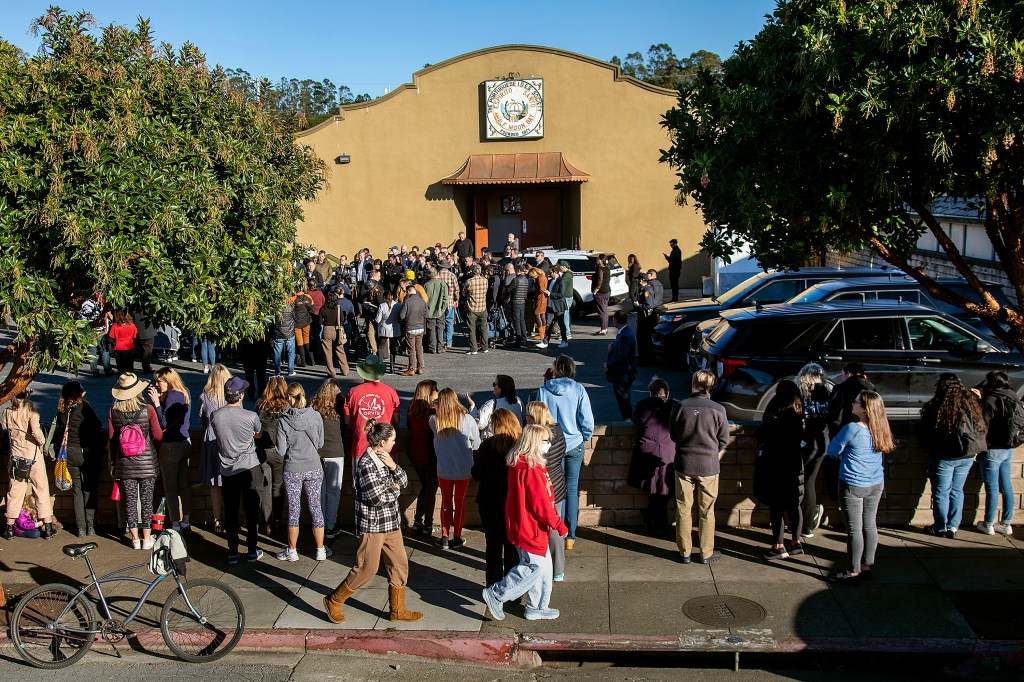 HALF MOON BAY — A day after a mass shooting at two mushroom farms shook this seaside community, horrific details began to emerge of farm workers hiding in portable toilets as a suspected gunman with a dark history opened fire, killing seven.

Officials said Chunli Zhao, the alleged 66-year-old shooter, lived with his wife in what locals describe as a ramshackle collection of trailers and tent-like structures housing a community of Asian and Latino immigrant workers. Court records suggest he may have been prone to violence, attempting to suffocate and threatening to “split (the) head” of a former roommate.

He also worked at Mountain Mushroom Farms, the first of the two shooting-spree locations. On Tuesday, law enforcement officials described Zhao was a “disgruntled” employee who showed up Monday with a semi-automatic pistol he purchased legally.

Evidence so far “points to this being an instance of workplace violence,” the San Mateo sheriff’s office said. The deadliest mass shooting in San Mateo County history came as the state reels from a crescendo of gun violence over the past 72 hours.

“They were killed with purpose, with intent, execution style,” said Congresswoman Anna Eshoo. Eshoo met with survivors, some who sought cover in portable toilets as the carnage ensued. “They’re fearful about their livelihoods, fearful for their families, and (there is) a great deal of trauma.”

San Mateo authorities said Tuesday there were “no proceeding factors” suggesting Zhao was readying for an attack. But recently unearthed court records from a decade ago detail a history of violent, workplace-related outbursts.

In 2013, Zhao’s former roommate and co-worker at a San Jose restaurant filed a successful restraining order in Santa Clara County court against Zhao after claiming he said, “Today I am going to kill you.”

The violent spat in March 2013 was tied to a dispute over Zhao’s losing his job at a San Jose restaurant and being told he’d have to pick up his final paycheck at the restaurant. Zhao’s roommate said he “took a pillow and started to cover my face and suffocate me” and also threatened to “use a kitchen knife to split my head” if he could not return to the job.

San Mateo County District Attorney Steve Wagstaffe said Tuesday that his investigators are learning all they can about the shooter. “We’re trying to find out, how did he buy a gun? Was he here on a work visa? Did he overstay a work visa?”

Wagstaffe anticipates that his office will file seven counts of murder, one count of attempted murder, along with other gun and special circumstances charges against Zhao on Wednesday, when he is expected to be arraigned in a Redwood City courtroom.

The shooting in Half Moon Bay is part of a rash of gun violence that has rocked the state. A shooter killed 11 people during a Lunar New Year’s celebration in Monterey Park on Saturday. And on Monday night, a gas station shooting in Oakland killed one person and injured four others.

But Newsom said that the Half Moon Bay shooting is also a “stacking of issues” related to squalid living conditions of agricultural workers and poor pay, a sentiment echoed by local officials and aid workers.

“What the hell is wrong with us,” he asked, “that we allow these weapons of war and large-capacity clips out on our streets and sidewalks?”

Among the victims are five adult males and two adult females of Latino and Asian descent who have yet to be publicly named. Family members and friends, however, identified to the Bay Area News Group two of the dead, Martin Martinez and Jose Romero Perez, and an eighth person, Pedro Romero Perez, who survived the shooting and is being treated at a Stanford trauma center.

Jose and Pedro Romero Perez are brothers who left behind multiple children in Mexico, according to Maria Melgar who owns the Hilltop Grocery store. “I’m a store owner, so I see them all the time,” said Melgar. She said the brothers came to Half Moon Bay to build a livelihood but were considering moving out of state to seek better work.

“I remember (they) would come in and buy the normal stuff, tortillas, tomatoes, bread and things,” said Melgar, who had tears streaming down her face. “I was taking a rest day yesterday, but when I got the call I was so sad I started crying. It’s so sad.”

Renato Juarez Perez, who is cousins with the two brothers, said he spoke with one of them just two days ago.

“He asked me to give him the number for the Mexican consulate to see about getting a passport to go back home and visit family,” said Juarez Perez. “I told him I couldn’t help him because I was going into work. Our shifts just didn’t line up. I didn’t get to see him.”

Sheriff’s Capt. Eamonn Allen said there is also a “very real concern of retribution” against Zhao’s wife, who lived on the mushroom farm with the suspected shooter. Allen added that his office has been “providing her resources” and considering her welfare in the aftermath of the shooting.

Democrats at all levels of leadership continue to call for heightened gun control measures in the face of a seemingly endless string of mass shootings.

State Assemblymember Phil Ting, of San Francisco, said he will be “going back to work” to see if lawmakers can tighten California’s gun laws, already among the strictest in the country.

Zhao, who is suspected of using a legally purchased semi-automatic handgun to carry out the attack, was spotted sitting in his vehicle in front of a sheriff’s substation on Monday and arrested about two hours after the shootings started.

Monday’s rampage echoes the Bay Area’s deadliest mass shooting when a disgruntled Santa Clara Valley Transportation Authority employee shot and killed nine of his coworkers in 2021. That attack has left deep scars among the victims’ families and the transit agency workers.

State Sen. Josh Becker, who represents Half Moon Bay, said he was speaking with an attorney involved in the VTA shooting aftermath.

Less than 24 hours ago, state Assemblymember Marc Berman said he was standing on the steps of the Capitol building in Sacramento for a vigil for the Monterey Park victims.

“It’s jarring, it’s tragic and it’s senseless,” Berman said. “I used to think that protecting our farmworkers was about protection from the sun or from wage theft. But now it’s from gun violence, too.”

As the shock lingered, President Biden early Tuesday promised “the full support of the federal government” as the community begins to recover.

Biden also called for stronger gun action across the United States. On Monday, Democratic Sens. Dianne Feinstein, of California, and Chris Murphy and Richard Blumenthal, both of Connecticut, introduced legislation to ban “military-style assault weapons” and high-capacity magazines or ammunition feeding devices. Another bill introduced by the three would raise the minimum purchasing age of an assault weapon to 21.

“Jill and I are praying for those killed and injured in the latest tragic shooting in Half Moon Bay,” Biden said in a statement. “For the second time in recent days, California communities are mourning the loss of loved ones in a senseless act of gun violence.”