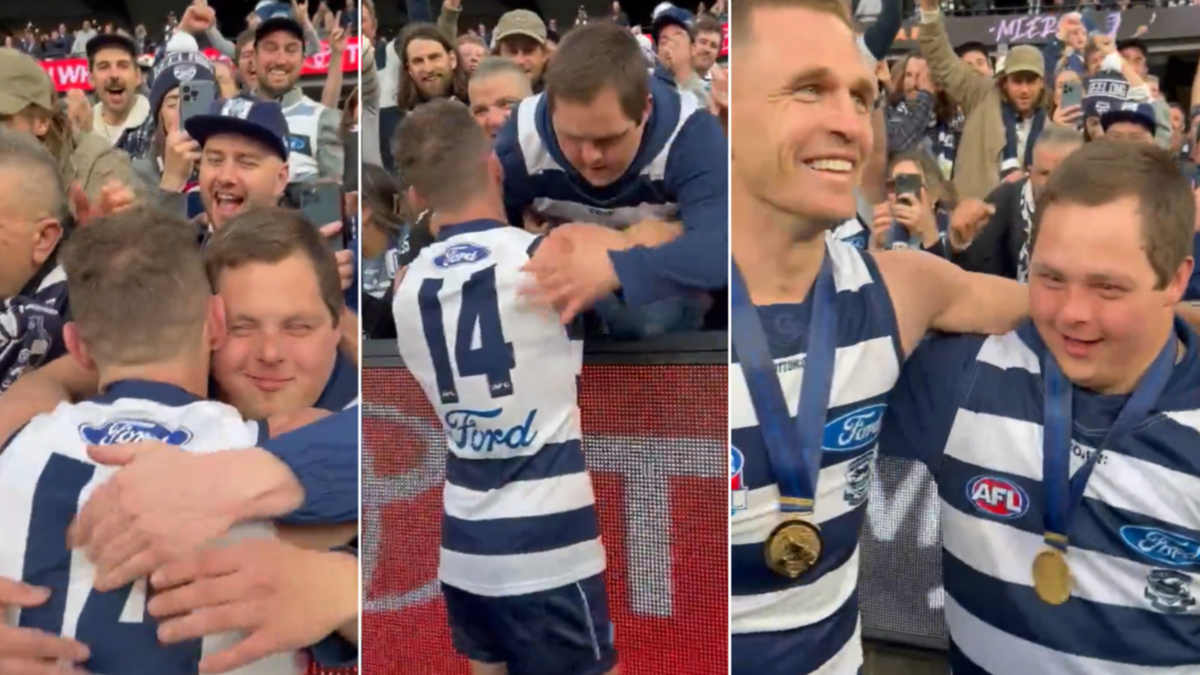 The Geelong Cats backed up their landslide premiership win on Saturday with some heartwarming moments.

One moment, in particular, went viral, as skipper Joel Selwood pulled the team’s longstanding water boy over the barrier and onto the oval to share the win.

WATCH THE VIDEO ABOVE: Cats skipper pulls water boy onto the oval to share premiership win.

Analysis, local footy and the biggest moments, Seven and 7plus are the home of footy shows for every fan. Stream them all for free on 7plus >>

Spotting Sammy Moorfoot, a longstanding Geelong Cats water boy, in the cheering crowd at the MCG, Selwood walked over for a high five and a hug.

He then pulled him over the barrier and onto the oval to share in the team’s win.

Moorfoot, who has Down syndrome and has been with the club for years, was beaming as Jeremy Cameron pulled off his own medal and placed it around his neck.

He turned back to the crowd which erupted as he shook his medal and threw his arms in the air.

He would later be seen holding the premiership cup above his head on the oval. The heartwarming moments garnered huge attention online.

Former federal opposition leader and minister for NDIS and government services Bill Shorten wrote on Twitter “Joel Selwood made a lot of dreams come true yesterday. This could be the sweetest.”

Even Swans fans were smiling after the exchange.

“The look on Sammy’s face when Joel asked him if he wanted to come on the ground was worth a $1million,” one footy fan wrote on Twitter.

“Disappointed Swans fan. But this is EPIC. Good on you Sammy. Awesome! Congratulations,” another wrote.

“Too good. I’ve been trying not to like Geelong all day and now you’ve ruined it, I have to like them!,” another wrote.

It wasn’t the only touching scene to play out across the day. Selwood also carried Gary Ablett’s son Levi onto the oval and handed his boots to Archie, the young Auskicker of the Year.

Moorfoot wrote on social media about his friend, saying Selwood is “the kindest and most generous person I know”.

He said he couldn’t thank the skipper enough “for everything you do for me” after Selwood also included him in the milestone celebration of his 350th game with the Cats.

Questions of Selwood’s retirement are now circling, in a move that would echo the exit of the team’s last premiership captain Cameron Ling, whose last kick in football was a left foot snap around the body to seal the Cats’ 2011 flag.

‘This is Everest’: Geelong take out legacy-sealing premiership in dominant grand final

Denial of responsibility! Todays Chronic is an automatic aggregator of the all world’s media. In each content, the hyperlink to the primary source is specified. All trademarks belong to their rightful owners, all materials to their authors. If you are the owner of the content and do not want us to publish your materials, please contact us by email – todayschronic.com. The content will be deleted within 24 hours.
AFLGeelongGeelong CatsNewsSport
0
Share

Aussie uni student’s pain laid bare: ‘My disability is invisible but the truth is I’m dying’