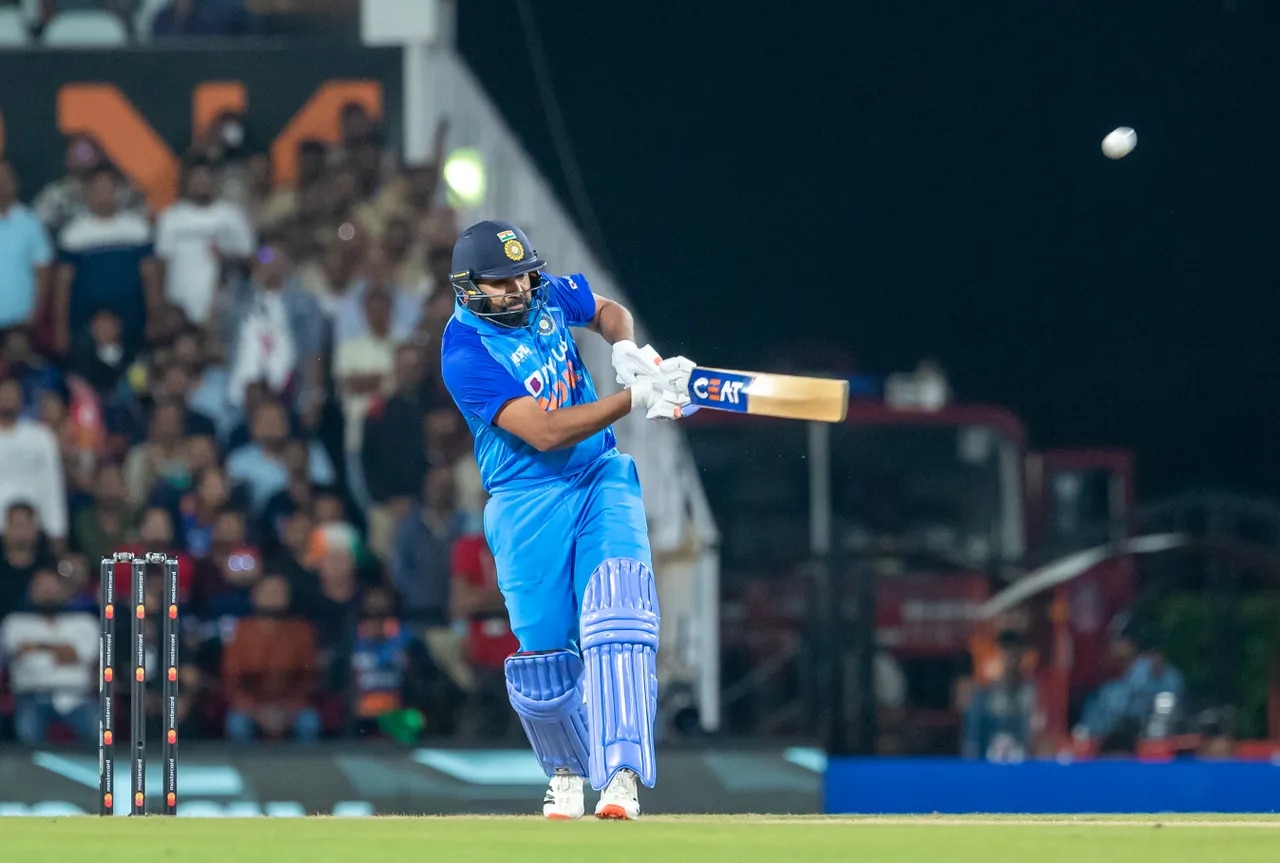 Nagpur: India captain Rohit Sharma produced an unbeaten 46 off 20 balls to help the hosts secure a 6-wicket win against Australia at the Vidarbha Cricket Association Stadium in Nagpur here on Friday. It was a truncated encounter due to rain where the overs per side were reduced to 8. Rohit won the toss and invited the visitors to bat first on a slightly two-paced track.Also Read – IND vs AUS 2nd T20 Highlights: Rohit Stars As India Breeze Past Australia By 6 Wickets To Level Series 1-1

With Australia posting 90/5 in their innings, Rohit and Rahul came with aggressive intent in order to take early control of the game. Also Read – Rohit Sharma Explains Why Dinesh Karthik Was Promoted Ahead of Rishabh Pant at Nagpur During 2nd T20I Between Ind-Aus

Rohit started the fireworks as he blasted Josh Hazelwood for back-to-back sixes in the first over — the second one a superb effort as he pulled it over the deep square boundary when the bowler chased him to the leg side. Also Read – Virat Kohli HITS Bullseye to Runout Cameron Green; Watch VIRAL Video

On the last delivery of the over, Rahul whipped a half-volley on the leg stump from Hazelwood over the mid-wicket as India scored 20 runs off the first over.

Though India lost a couple of quick wickets, the early onslaught kept them ahead of Australia, Rohit continued to blaze away, leading from the front with a 20-ball 46 not out as India defeated Australia by six wickets in the second T20I truncated to eight-over-a-side due to wet outfield, levelling the three-match series 1-1.

Though it came in a match truncated to eight overs a side, it was a memorable victory as it was India’s first win over Australia in a T20I at home since 2017.

And Rohit led his team from the front and made it possible. He continued to torment the Aussies, hooking a short one by Pat Cummins for a six in the second over and meted out the same treatment to Adam Zampa, lofting the spinner over lone-on for his fourth six,

Zampa bowled Rahul, foxing the Indian opener with a slower one that crashed into the off stump. Virat Kohli hammered two fours — one each off Daniel Sams and Zampa before the latter had the last laugh when the former India captain jumped out to work the delivery through mid-wicket but the ball skidded through the gate to crash into the leg stump. Zampa gave India a scare when he sent back the in-form Suryakumar Yadav off the next delivery before Hardik Pandya survived the hat-trick ball.

Despite the setbacks, India were cruising at 58/3 after five overs as Australia was 46/4 at the same stage in their innings.

Rohit continued to torment the Aussies as he led from the front, hitting Sean Abbott for back-to-back boundaries. India lost Hardik Pandya (9) in the seventh over as India were down to 77/4. Rohit struck Pat Cummins to a boundary as India went into the final over needing nine runs to win.

But Dinesh Karthik settled the issue as he hoicked Daniel Sams to a six and four off successive balls to seal victory for India with four balls to spare. Zampa was the best Australian bowler on the day as he claimed 3-16 in his two overs.

Earlier, Matthew Wade continued to prove a thorn in the side for India in the ongoing series as he blasted an unbeaten 43 off 20 deliveries to help Australia post 90/5 in eight overs in the match truncated due to a wet outfield.

The visitors were reduced to 46/4 in the fifth over when skipper Aaron Finch departed for 31 (15 balls, 4×4, 6×1) as he became Jasprit Bumrah’s first victim on return to action after an injury. Finch had hammered Hardik Pandya for two fours in the first over and had meted out the same treatment to Axar Patel in the second. He had lifted a tossed-up delivery over bowler Yuzi Chahal’s head for the only six of his knock.

Matthew Wade, who had guided Australia to victory in the company of Tim David in the first match at Mohali, then took matters into his hands as he blasted four boundaries and three sixes for a 20-ball unbeaten 43 that lifted Australia to a competitive total. He shored up the Australian innings by hitting Harshal Patel for three sixes in the eighth and final over of the ball.

Earlier, Australia did not get off to a good start as they lost Cameron Green with only 13 runs on the board as the all-rounder was run out at the non-striker’s end, going for a quick second. Green was dropped by Virat Kohli a few balls earlier as he covered a good distance from long-on but could not hold on to the ball, which dribbled into the boundary. Green scored five runs, hitting a four off Axar Patel.

It became 2/19 soon as Glenn Maxwell did not trouble the scorers as he was bowled by Axar Patel off a length ball. Maxwell backed away to slog it over the infield but missed it completely.

India got another success as Axar Patel got rid of Tim David, promoted in the order as the Aussies looked for some big ones to shore up their score, was castled tried to make room to an arm ball and slog it on the leg side. The ball struck the middle stump.

Axar Patel was the most successful Indian bowler with 2/13 in his two overs. Jasprit Bumrah claimed 1/23 in his first match on return from injury.

Denial of responsibility! Todays Chronic is an automatic aggregator of the all world’s media. In each content, the hyperlink to the primary source is specified. All trademarks belong to their rightful owners, all materials to their authors. If you are the owner of the content and do not want us to publish your materials, please contact us by email – todayschronic.com. The content will be deleted within 24 hours.
Aaron Finchaus vs ind t20cameron greenHardik Pandyaind aus t20IND v AUSInd vs Ausind vs aus 2022 2nd t20i
0
Share

After Ravens fall apart again in 23-20 loss to Bills, home…