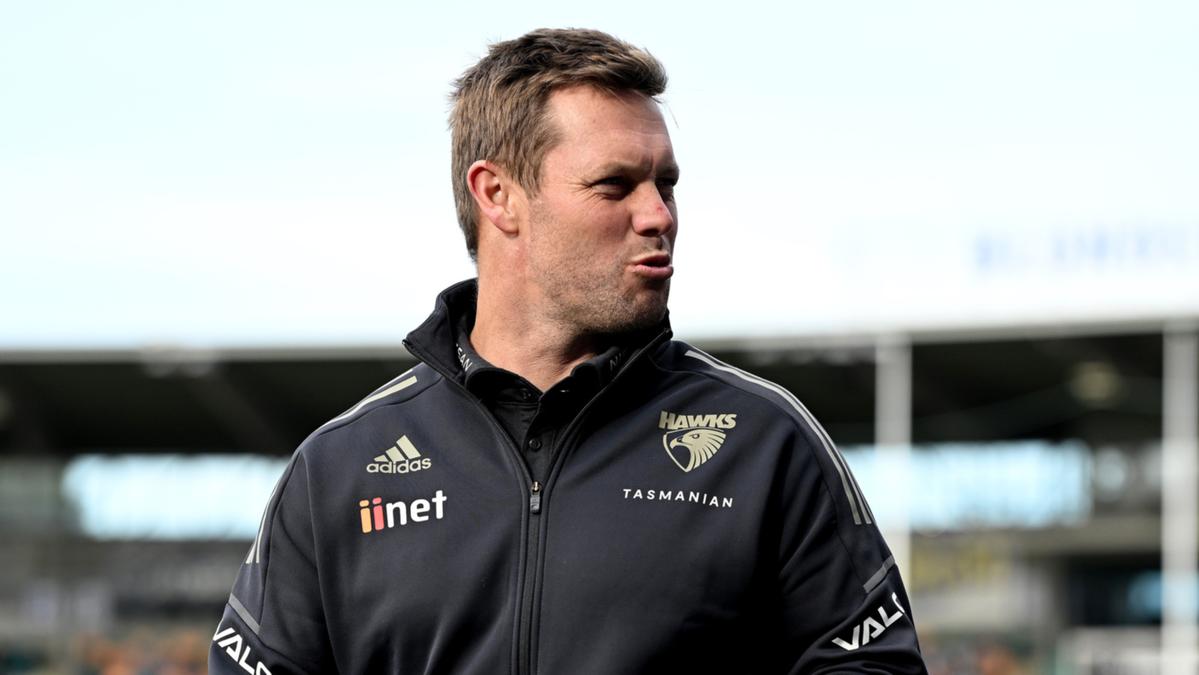 Hawthorn coach Sam Mitchell isn’t shying away from the ruthless trade period that thrusted his club into the AFL spotlight.

The Hawks traded away Brownlow medallist and triple best and fairest winner Tom Mitchell and midfield partner Jaeger O’Meara in a double bombshell.

WATCH THE VIDEO ABOVE: Sam Mitchell talks exclusively to 7NEWS.

Analysis, local footy and the biggest moments, Seven and 7plus are the home of footy shows for every fan. Stream them all for free on 7plus >>

The pair both arrived at the club at the end of 2016 and were set to extend Hawthorn’s premiership window under master coach Alastair Clarkson.

And while they both carried the midfield during their time at the club, the Hawks only managed to make the finals once in 2018 when they crashed out in straight sets.

After three consecutive years in the bottom six and with coach Mitchell one year into his reign, the Hawks are on a mission to regenerate their list.

“(But) the mix didn’t work for us in the last couple of years and we’re looking to regenerate our midfield.

“When we look at the best teams in the competition, they’ve got some midfielders who are pretty damaging and at a whole another level from what we currently have.”

“We know that if we just don’t make hard calls, that you don’t get there. You do have to make some hard calls to get where you want to go as a football club,” Mitchell said.

“We want to make sure we’re a team that’s competing for silverware, not just plugging along and hopefully making the eight.

“I was clear that’s not Hawthorn’s ambition, it never has been.”

With more than 1000 games of experience departing, the Hawks brought in former Port Adelaide midfielder Karl Amon as a free agent, as well as young ruckman Lloyd Meek and midfielder Cooper Stephens from Fremantle and Geelong respectively.

The list transformation has seen the Hawks go from one of the oldest to one of the youngest in the space of four years.

“Outside of McEvoy and Gunston, all of those were our choices as a club. We’re very, very clear about our strategy.

“We need to build the standards and the cultures and all the things that bring premiership success and if we start it with the older guys now, they’re not going to be here to see it through.”

Mitchell is confident he now has a young nucleus that can drive the Hawks to their next flag.

“There’s no speed limit to what that looks like, we’re going to go as fast as we can in the direction we can, we know that basically now, we have the nucleus of the team that can take us to where we want to go,” he said.

Mitchell has had a busy off-season with visits to Harvard and also a week immersed with Celtic manager Ange Postecoglou and former Socceroo Harry Kewell.

“Probably what I learnt as a coach, was that as a young coach, I sweat the small stuff a little bit too much,” he said.

Denial of responsibility! Todays Chronic is an automatic aggregator of the all world’s media. In each content, the hyperlink to the primary source is specified. All trademarks belong to their rightful owners, all materials to their authors. If you are the owner of the content and do not want us to publish your materials, please contact us by email – todayschronic.com. The content will be deleted within 24 hours.
AFLHawthorn HawksSport
0
Share

Ottawa rolls out CAN$1.6 bn plan to adapt to climate change

Transitory inflation talk is back. But economists say higher…

5 great Pegassi vehicles that are worth owning in GTA Online